Radanovich is enjoying the fruit of his labors in Central California. (Courtesy George Radanovich)

It’s easy to imagine that during his tenure on Capitol Hill, former Rep. George Radanovich would have spent many an evening confined to a dimly lit reception room, nursing a so-so glass of wine while mingling with armchair politicians and Washington insiders.

Turns out, he’d much rather get his hands dirty.

“I came back to a few acres that were untrained and unattended for about 10 years,” the eight-term lawmaker said of the fallow vineyard he has since lovingly restored to health in a bid to return to his wine-making roots. The ambitious vintner — Radanovich Winery, which at the height of its powers was projected to have shipped around 6,000 cases per year, operated from 1986 till 2003 — first rode into town in 1995 as part of the Republican Revolution.

Radanovich served as president of the GOP freshman class during the second half of the 104th Congress (he succeeded then-Rep. Roger Wicker of Mississippi) and regularly huddled with members of the Republican Study Committee. 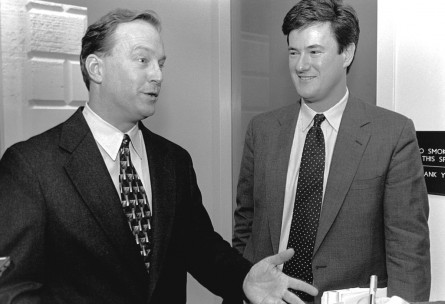 He remained focused on viticultural issues throughout his career.

Radanovich co-founded the Congressional Wine Caucus with his delegation-mate, Democrat Mike Thompson, forging a bipartisan friendship that continues to this day. “I owe him a bottle of wine,” Radanovich quipped.

He sought out opportunities to address immigration overhaul and drought management strategies while in office; his Drought Alleviation Act of 2009, which proposed temporarily setting aside endangered species curbs to bolster regional water pumping activity, ultimately withered in the Natural Resources Committee.

After coasting to re-election for over a decade, Radanovich decided to retire after the 2010 elections.

He’s since flirted with a return to elected office, mulling a run for governor of the Golden State in 2014.

His true calling, though, may be fulfilling his lifelong dream of cultivating Mariposa County into a next-generation wine capital.

“Even though we are in California, Mariposa is still an unknown wine region … So I am keeping production to small lots and releasing wines from the grapes that we find do well here,” he said of the fledgling 1,000 Vines project. (Neighboring Madera County received an American Viticultural Area designation in the 1980s.)

While consumed by logistics (he considers duties ranging from engineering a quadrilateral cordon system to the warding off of ravenous birds personal responsibilities), Radanovich said he entrusted the actual harvesting and pruning of the two acres of plantings to farmhands.

He’s also keen on consulting with fellow winemakers — “Aging methods and such,” he said of the shoptalk that naturally bubbles up — often milling about at the Estate Crush facility in Lodi, Calif., where his grapes undergo their glorious transformation.

So far, so good, it would seem.

“Harvest went really well this year,” Radanovich told Roll Call of the dual crops — Sauvignon Blanc for the 2015 vintage and a Cabernet Sauvignon he hopes to usher to market by 2017 — he hauled in this past growing season.

Although he’s worked with Sauvignon Blanc in the past, Radanovich said life experience and emerging technologies have only upped his game.

“With the new system and bird netting, the fruit is the same but much more intense,” he said of the markedly improved end product.

After racking up his 100th case of wine earlier this spring, Radanovich began putting the word out that he was back in business. “I think you will really like this wine! It is getting great reviews,” he shared in an email blast announcing his 2014 bottling.

Things have only snowballed from there.

“I’ll be all sold out by Christmas,” he said of “limited edition” run supporters such as Wine Institute President Robert P. Koch have eagerly snatched up.

“I gave a few bottles away to friends and all of them got back to me to let me know it was fantastic,” Koch, who copped to purchasing a case of Radanovich’s wine, shared.

“George has always been a great friend and supporter of the wine industry, both when he was Chair of the Wine Caucus and now as a vintner once again,” Koch said. “His passion and success is no surprise to any of us who know him.”

This encore performance, though, might just be the beginning, Radanovich said. He mentioned introducing additional varietals into the mix — listing Tempranillo, Grenache and Syrah as the most likely candidates — as part of his decade-long plan to finally put his beloved home on the wine map.

Mind you, he’s also attempting to trim fatherlessness, unwed pregnancies and the divorce rate in California each by 30 percent across the same horizon via his Restore California initiative.

Lofty goals, to be sure.

But it’s also exactly the type of action that could pave the way for a return visit to the nation’s capital.

“No invites yet,” he said of the current state of congressional outreach. “But would like to see old friends and drink wine.”