Diversity Concerns Linger at the Library of Congress

Even with first African American poised for top job

Save for later
The Library of Congress could soon have the first African American and first woman chief librarian in its 200-year history. But some employees worry that the expected arrival of Carla D. Hayden won't be enough to end a decades-long struggle with discrimination and diversity in its workforce.
"Yeah, she'd make history," said Priscilla Ijeomah, who has worked at the library for nearly 30 years. But she said that if Hayden doesn't make changes, "all it will be is history."
Ijeomah is one of the plaintiffs in an ongoing lawsuit that alleges systematic discrimination against minority employees at the world's largest library.
[ Hayden Would Be First Woman, African-American to Head Library of Congress ]
The LOC has been working to limit discrimination and bolster minority representation. But some, including a union president, believe the institution still has a long way to go.
Darryl Clark, president of AFSCME Local 2477, has heard the library referred to as "the last plantation," given that parts of the building were segregated in the mid-20th Century.
"It has changed from that. There have been some strides," said Clark, who is African-American. But he said a "glass ceiling" persists in terms of diversity in key leadership positions.
"We can't break through," he said.

Two decades ago, the library made history with the largest settlement by a U.S. agency for a discrimination case.

In 1996, the library began paying $8.5 million in cash payments and $1.6 million in legal fees to roughly 2,000 plaintiffs. The case, known as Cook v. Billington et al., stemmed from a 1975 administrative complaint filed by the Black Employees of the Library of Congress and Howard Cook, who worked for the Congressional Research Service. The group alleged discriminatory practices, including denying promotions due to race.
Discontent at the library had been stewing for years. A protest in the library's main reading room in June 1971 drew 100 employees and led to 28 suspensions, The Washington Post reported.
After the lawsuit was settled, some workers still saw an institution that was slow to change. Since the Cook case, the library has faced more than 50 cases alleging job discrimination, according to federal court records.
One of those cases gained national media attention. In 2005, the American Civil Liberties Union filed a lawsuit on behalf of Diane Schroer, whose job offer at the library was rescinded after she revealed she was transitioning from male to female. The library eventually had to pay more than $400,000 in damages.
With these discrimination stains on its legal record, the library has sought to make changes.

Diversity by the numbers

The library currently has 3,297 employees, 57 percent of whom are white. Roughly 30 percent are African-American, 8 percent are Asian-American, and just under 3 percent are Hispanic, according to data provided by a library spokeswoman.
Though the library's racial diversity exceeds the rest of the federal workforce, some workers say they still struggle to receive promotions or raises. 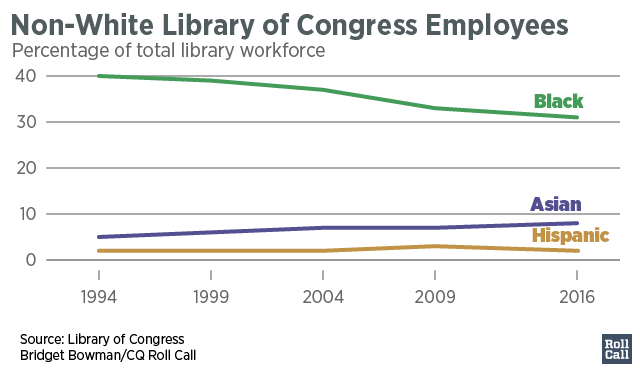 The library does not have diversity data broken down by position or grade level, but is working on a report. That will come in concert with a new diversity strategic plan, which is in the final approval stages.
Evelio Rubiella, the acting director of the Equal Employment Opportunity and Diversity Programs office, said the staff has been focused on initiatives to boost Hispanic workers and hire more disabled employees. Both goals were highlighted in the library's 2011-2016 affirmative employment plan. The library has also developed programs aimed at diversifying management and fostering skills needed to advance.
[ Library of Congress Nominee Impresses Senators ]
Rubiella said in an interview that the LOC is still compiling data on workforce diversity, and he cautioned that current numbers are "not very scientific" because they are self-reported.
A copy of the library's 2011-2016 affirmative employment plan detailed an analysis of workforce trends at the library from 1994 to 2009. African-American representation decreased over that period, while Asian and Hispanic numbers increased.
The analysis found that in 2009, Hispanics were generally underrepresented. Individuals with disabilities and African-Americans were leaving the library at faster rates than new employees were being added. Women and Asian-Americans were underrepresented at senior level and supervisor positions.
The authors of the analysis suggested the library conduct a study on the why people were leaving, something that Rubiella's office has not been tracking.
Rubiella said he was not aware of any advancement issues in the workforce and emphasized that promotion and hiring decisions are based on merit. Workers who suspect discrimination, he said, can file an Equal Employment Opportunity complaint, or go to court.
"I just look around, and I see a lot of diversity," Rubiella said. "So I'm not aware that there's any barriers to moving up, again, as long as there's a position available."

Christine Mills is a library technician who has worked at the institution for more than 30 years. When she and two other women in her division applied for a position and were passed over for a white man, she started considering a lawsuit against the library.
In 2004, Mills and a dozen others filed a class-action lawsuit, laying out areas where they say the library discriminates against minority employees, including in selections for competitive positions, awards and bonuses, discipline, training and retaliation.
The library countered that the plaintiffs did not provide detailed accounts of discrimination and did not cooperate with the internal grievance process.
In March, a federal judge denied the plaintiff's motion to be certified as a class action, due in part to a late and inadequate filing by their lawyer. The plaintiffs are challenging the ruling, arguing that their lawyer had health, cognitive and memory issues due to his age. They are currently seeking new representation.
Mills said she was not hopeful her case would be resolved. She was frustrated with the inability to access data on diversity at the library.
"They're hoping that we'll either die out or run out of money," William Rowland, one of the plaintiffs who retired in 2006, said of the lengthy lawsuit.
Meanwhile, Mills said the library is still struggling with discrimination issues. She estimated that she has applied for at least 10 jobs within the LOC since she filed her lawsuit, with no success.

Clark, the union chief, said he also sees issues with advancement. The union represents nearly 700 library employees, most of them in lower grades and most are minorities.

Clark said the application process can be confusing, with an emphasis on certain key words that influence one's application score. He said there are often cutoff scores for a certain job, which can disqualify applicants.

Clark was also not aware of the affirmative employment plan for 2011-2016. During a phone interview, he attempted to pull up the plan on the internal website, but received an error message.

"That's the extent of [our] affirmative action program," Clark said.

Mills said a change at the top might not solve all of the racial tensions at the library, just as President Barack Obama becoming the first black president did not solve racial divisions in the country. She hoped Hayden would meet with her and seek input from the workforce.

"Just like people see the president being African-American, so they're logically thinking things have changed," Mills said. "Don't think that's going to be any different. It's not going to change. She needs to come in with her own staff. They still need to be open minded."

Hayden, who is awaiting confirmation, has declined to give media interviews. Rep. Elijah E. Cummings said Hayden is up for the challenge. The Maryland Democrat represents Baltimore, where Hayden has led the Enoch Pratt Free Library since 1993.

"I think without a doubt she is one that definitely believes that diversity is not a problem, but it's our promise," Cummings said. "I can tell you, she's not going to tolerate anyone being treated unfairly."