Boehner Finds the Woman for the Job

When House Republicans set up a photo-op amid the shutdown of their people ready to sit down and negotiate with the Senate, eight men with rolled-up shirtsleeves sat at a long table before the cameras.

That striking image of an all-male negotiating team won't repeat itself anytime soon, now that one of the four House Republicans selected to serve on the bicameral, bipartisan budget conference committee is a woman.

Second-term Rep. Diane Black was chosen last week to sit at the conference table alongside three senior lawmakers, a surprise pick that will catapult the Tennessee Republican into her highest-profile role yet.

In an interview with CQ Roll Call, Black said Speaker John A. Boehner called her early in the day on Oct. 16 to ask if she'd be interested in the position, but she didn't know it was a done deal until later that night.

Black couldn't say why exactly the Ohio Republican chose her to serve on the prestigious panel tasked with producing a budget by Dec. 13. She speculated that it had something to do with her proven track record in the Tennessee state House and Senate, her training as a nurse and her experience in the business community.

“My past performances should indicate that I am someone who is willing to sit in a meeting and listen to the other side, and that I have been in positions before where I dealt with some very serious issues of setting budgets,” she said.

Rep. Renee Ellmers, chairwoman of the Republican Women's Policy Committee, said Black's appointment was in part because of the fallout over the image of the original men's club of House GOP negotiators.

"It unfortunately played into the message that's out there from the left that Republicans do not look at women's issues as vital for America to move forward," Ellmers told CQ Roll Call.

The North Carolina Republican said that the episode became a "teachable moment" for her party's leaders. At a recent all-members meeting, Ellmers confronted them about the decision to put eight men but none of the 19 House Republican women in the media spotlight.

"[Boehner] literally got up and said, 'You know what, Renee, that was a mistake,'" Ellmers recalled. "And I believe that it was just a very innocent mistake, and I don't think they realized how that looked.

"I believe it is not a mistake that will be made again." 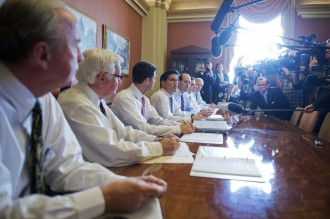 On Oct. 1, an all-male team of GOP negotiators sat across from an empty table for the cameras. (Tom Williams/CQ Roll Call)

Aside from the woman factor, Ellmers called Black "an incredible voice for policy" whose grasp of fiscal matters and eye for detail will make her a strong player at the table.

And Black's appointment might have been strategic on other fronts as well.

Black hails from the iconoclastic class of 2010, whose members would have clamored for “one of their own” to serve on the budget conference. She's also a team player who, like other mainstream House Republicans, wants to rewrite entitlement programs and exclude tax increases as part of any budget deal. Leadership can probably trust her not to stray too far from the party line.

Boehner spokesman Michael Steel said Black is the perfect marriage of all the right criteria: “As a member of both the Ways and Means and Budget committees — and part of the House GOP’s historic class of 2010 — Rep. Black brings a hard-nosed, common-sense perspective to this group."

Ryan, in an emailed statement, called her a “key member” of the Budget Committee and a “leader for entitlement reform.”

“I know every member of the budget conference will benefit from her knowledge and dedication,” Ryan said.

Black has had a charmed professional life since arriving in Washington, D.C., in 2010. Her freshman colleagues picked her to serve as their representative on the Republican Policy Committee, the National Republican Congressional Committee put her in charge of communication outreach, and leaders gave her plum committee slots.

Her appeal at the outset was due in large part to her status as a polished politician coming into office in a pool of political newcomers.

A 12-year veteran of the Tennessee state legislature, she ultimately climbed the ranks to be GOP caucus chairwoman of the state Senate. She uses her background as a nurse in her arguments against Obamacare and abortion. The founder of Aegis Sciences Corp. with her husband, she can talk the talk on jobs and the economy. She is No. 14 on Roll Call's 50 Richest Members of Congress list, with a minimum net worth of nearly $25 million.

During the 2010 campaign, she doled out contributions to more than a dozen Republican candidates.

Speaking with CQ Roll Call, Black acknowledged that she has been given “incredible opportunities to be in places to be in important conversations.”

She also stressed that just because people outside the insular world of Capitol Hill hadn't noticed her before, it doesn't mean she wasn't always there, clocking long hours and focusing on the tasks at hand.

“I do know there will be more recognition, and what I can say about that is I just plan on working as hard as I can,” Black said. “I just want to let folks know, it’s not my first time at the table.”