Cruz and Rubio Differ in Style, Not So Much on Votes

Tuesday's New Hampshire primary is supposed to reveal if Ted Cruz has claimed a prime position on the “insurgent” side of the road and whether Marco Rubio has pushed to the front of the “establishment” lane.

But the best empirical evidence from their senatorial records reveal that, while their styles of conservatism are undeniably different, they have nonetheless ended up taking the same positions on policy substance far more often than not. The votes they’ve cast suggest they’re close enough to touch across the white stripes symbolically dividing the GOP. During their three years together at the Capitol, Florida’s Rubio has voted according to President Barack Obama’s wishes only a relative handful of times more often than Texas’ Cruz, placing their cumulative presidential support scores during Obama’s second term in almost the same place — comfortably below the Senate Republican average.

In addition, during roll calls that have divided most Republicans against most Democrats, over time the two senators have ended up toeing the party line to a remarkably similar degree — which is almost the same as the typical GOP senator. 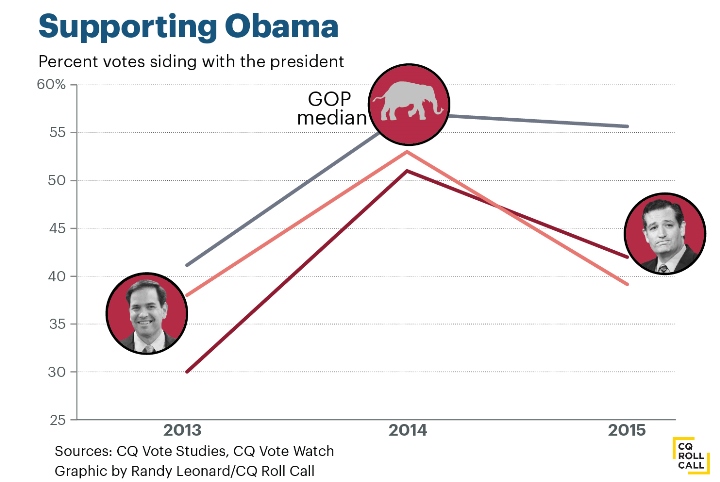 These realities were amplified with the release of the 2015 versions of the vote studies that colleagues on the CQ side of our newsroom have undertaken annually now for 70 years.

In a challenge to the conventional narrative, which focuses on Cruz’s well-documented zeal for combat with his party colleagues, for the first time last year he was as much in step as Rubio with the mainstream of the Senate Republicans — on both party unity and presidential support.

The Iowa caucus winner adhered to the GOP line 90 percent of the time, while the median GOP party unity score was 94 percent. Rubio’s score was among the 10 most doctrinaire in the caucus at 97 percent. In 2013 and 2014, the situation was reversed, with Cruz an outlier in his loyalty and Rubio very close to the party average.

And Cruz was with Obama on 42 percent of the 2015 votes where the president’s position was promoted in advance, a little more often than Rubio at 39 percent.

The previous years, the Floridian’s support score was a few points higher than the Texan’s, but in all three years both opposed the president more often than most of their colleagues. In fact, both were among the half-dozen GOP senators who bucked Obama most often last year. (The GOP scores have only been as high as they are because fully two-thirds of these votes in the past three years have been on administration and judicial confirmations, the vast majority of which are non-controversial.)

A lawmaker’s party unity and presidential support over time is a useful measure of where they fall on the ideological spectrum compared with other members of Congress in their party. Another is to line up a collection of decisive or bellwether roll calls on high-profile issues.

And this approach, as well, shows Cruz and Rubio in agreement much more often than not.

Just 14 or fewer Republican senators voted against some of the most prominent bipartisan achievements of last year: An overhaul of how doctors and other Medicare providers get paid, a rewrite of federal highway and mass transit programs and a replacement for the No Child Left Behind education law. Both presidential candidates were together in the small dissenters’ camps all three times.

Cruz also voted against the $1.8 trillion package of spending and tax cuts that both parties negotiated to end the year, while Rubio announced he’d have done the same had he not decided to miss the vote. Had he been there, the final GOP tally would have been 27 in favor and 27 opposed.

(By the way, the other annual CQ vote study, about participation in roll calls, affirmed Rubio’s standing as the most absent senator in 2015. He skipped 120 votes, or 35 percent. But Cruz was missing third-most often, missing 80 votes, or 24 percent.)

It’s been much the same on other key votes during the past three years. Both have voted against raising the debt ceiling, against emergency aid for victims of Superstorm Sandy, against the new farm bill, against confirming Chuck Hagel as Defense secretary, against Obama’s nuclear deal with Iran, against new gun controls, against protecting gay people from job discrimination, in favor of building the Keystone XL pipeline and in favor of keeping the 2013 federal government shutdown in place until Obama agreed to abandon his health law.

(The next year, however, Rubio voted for a stopgap spending bill that warded off another potential shutdown while Cruz was among 12 Republicans voting “no.”)

In the end, domestic surveillance and immigration are the only hot-button issues in Congress that have brought differences between the two to the surface. To be sure, they’re high-profile candidates, and so their disagreements have taken up a large share of their presidential stump speeches and debate performances.

Last summer, Cruz was among 23 Republicans voting for, and Rubio among the 30 against, enacting the law that has ended the government’s bulk collection and storage of telephone metadata in the name of spotting potential terror plots. Each maintains his vote was the better one for national security.

And whatever their past rhetoric, or their current positioning, this much is undeniable: Rubio was among the bipartisan group of eight senators who negotiated the 2013 measure creating a path to citizenship for undocumented immigrants, then joined just 13 other Republicans in voting for that bill. Cruz was among the 32 from the GOP who opposed it.

Measured against the expansive panoply of policies that senators — and presidents — are compelled to think about, the differences between Cruz and Rubio are deep in the shadow of their similarities. Both are driving right down the middle of the conservative road.