The Clintons’ “two for the price of one” ticket, a prominent feature of Bill Clinton’s 1992 presidential race , is one of the longest-running acts in politics.

Twenty-four years later, it even applies to the speaking slots for the Democrats’ Philadelphia nominating convention.

In the long run-up to Hillary Clinton’s acceptance speech on July 28, former presidents usually get a slot. So does the spouse of the nominee.

Bill Clinton fits the bill for both. Which role does he play when he takes the stage on the second night of the convention?

There’s a clue in those who will accompany him: the mothers of Eric Garner , a black man killed by a New York City police officer in 2014, and Trayvon Martin, the African-American Florida teen shot to death in 2012 by a neighborhood watchman, among other “mothers of the movement,” as the campaign is calling them.

“Bill Clinton is a unique figure in this election,” says Justin Buchler, an associate professor of political science at Case Western Reserve University. “So we don’t know what his effect might be.”

One thing is sure, though. Almost no other figure in modern politics has dominated his party’s quadrennial confabs like Bill Clinton. And while this is now Hillary Clinton’s party, as befits her status as the nominee, the nominating convention is Bill Clinton’s kind of party.

Just look at the way he turned things around after his disastrous convention speech in 1988 . That year in Atlanta, he nominated Massachusetts Gov. Michael Dukakis in a meandering, 33-minute address, defined more by the uncomfortable drone of a restless audience than his preview of themes he would deploy in his own, later, campaigns, such as “building a bridge to the future.”

He was even mocked by the crowd with an outburst of applause when he said “in closing.” 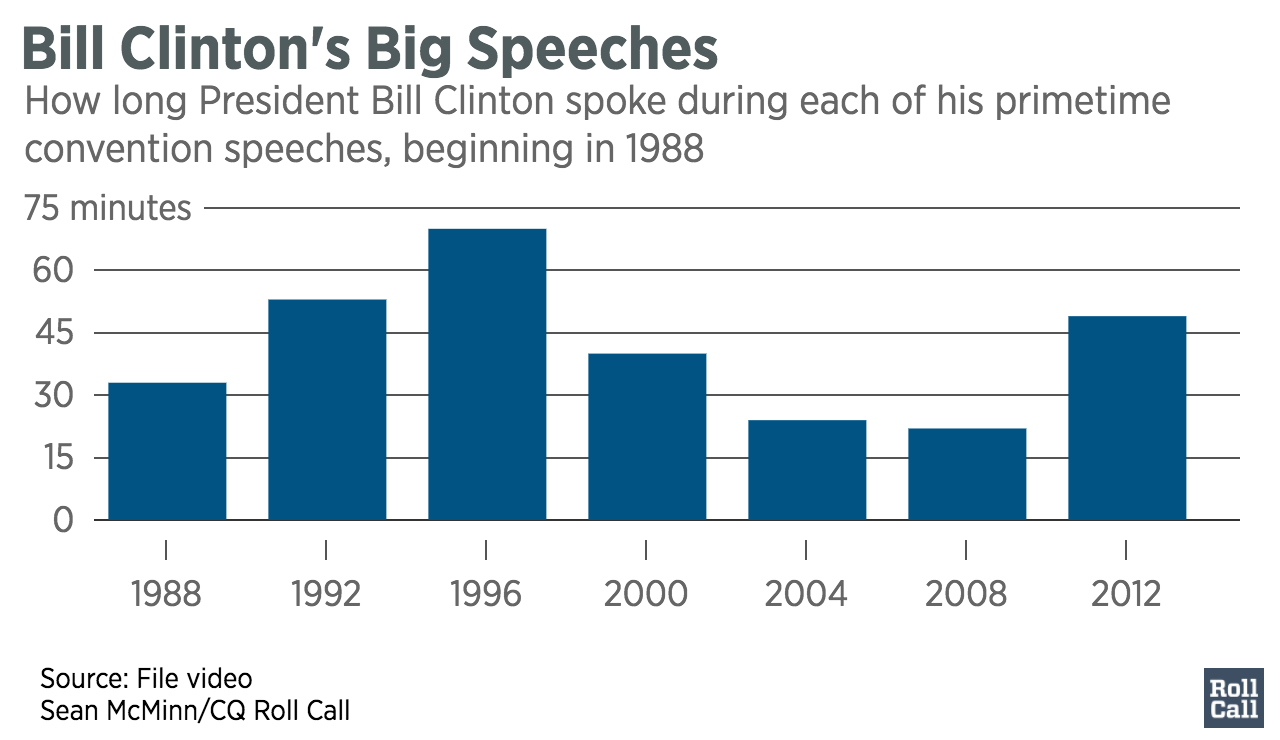 Four years later, he was no longer a small Southern state’s governor, angling for attention on national television. He was the nominee-in-waiting.

But first he wanted to put 1988 behind him. After thanking the host city’s mayor and others, he moved to exorcise the ghosts of Atlanta.

“I ran for president this year for one reason and one reason only: I wanted to come back to this convention and finish that speech I started four years ago,” he said on July 16, 1992. Those in the convention hall laughed.

He’s had his run of the place since.

Well, in 2012, he made a compelling case for re-electing Barack Obama in a speech that stretched almost twice as long as his infamous 1988 debacle.

“The Republican argument against the president’s re-election was actually pretty simple — pretty snappy. It went something like this: We left him a total mess. He hasn’t cleaned it up fast enough. So fire him and put us back in,” he said; what followed was a point-by-point argument, by turns wonky, funny, analytical and playful.

The teleprompter practically groaned to a halt because of Clinton’s many asides, as can be confirmed by comparing the prepared text to the delivered speech.

The party faithful loved it, and Obama romped to victory over Mitt Romney.

Since Hillary Clinton jumped into the 2016 fray, Bill Clinton has been her stalwart campaign surrogate, dispatched far and wide, as well as by her side, whenever called for, which is often.

During the long primary campaign against Sen. Bernie Sanders, the Clinton campaign’s communications office sent out nearly as many announcements of Bill Clinton’s whereabouts as it did about the candidate herself.

“It’s riveting. After all these years, in so many circles, he’s just so popular. That’s been a huge asset for her,” says Anita McBride, a former chief of staff for first lady Laura Bush and assistant to President George W. Bush who is now executive in residence at the American University School of Public Affairs’ Center for Congressional and Presidential Studies.

His renowned stump skills have invited comparisons of their styles.

“Bill Clinton is known for being able to out-campaign anyone, anywhere, anytime, and one of the criticisms of Hillary Clinton is she’s just not that natural a campaigner,” says Sarah Niebler, assistant professor of political science at Dickinson College. Niebler points out that Obama, a strong campaigner in his own right, has brought out these comparisons as well, including his recent joint appearance with her in North Carolina.

But Bill Clinton’s status as her spouse and as a popular ex-president puts him in a special category.

“We’re all treading new ground. It should be seen for what it is. It’s historic,” McBride says.

“That comment that they made has come full circle,” she adds, referencing the “two for the price of one” slogan.

At a campaign event before April’s Democratic primary in Maryland, for instance, the former president wowed a capacity crowd at the Leisure World retirement community in Montgomery County with his effective advocacy.

“He gave some details about things that Hillary did when she was younger,” says Dawn Hubbell.

“I know sometimes people think that she might have not done as much ... but some of his examples he gave shows that she really has been for the people,” she adds.

One of the public figures at the event, Maricé Morales, the Democrat who represents Leisure World in Maryland’s House of Delegates, says she appreciated how the former president made his appearance “all about her.”

But for some people, Bill Clinton’s charisma outshines his wife’s. 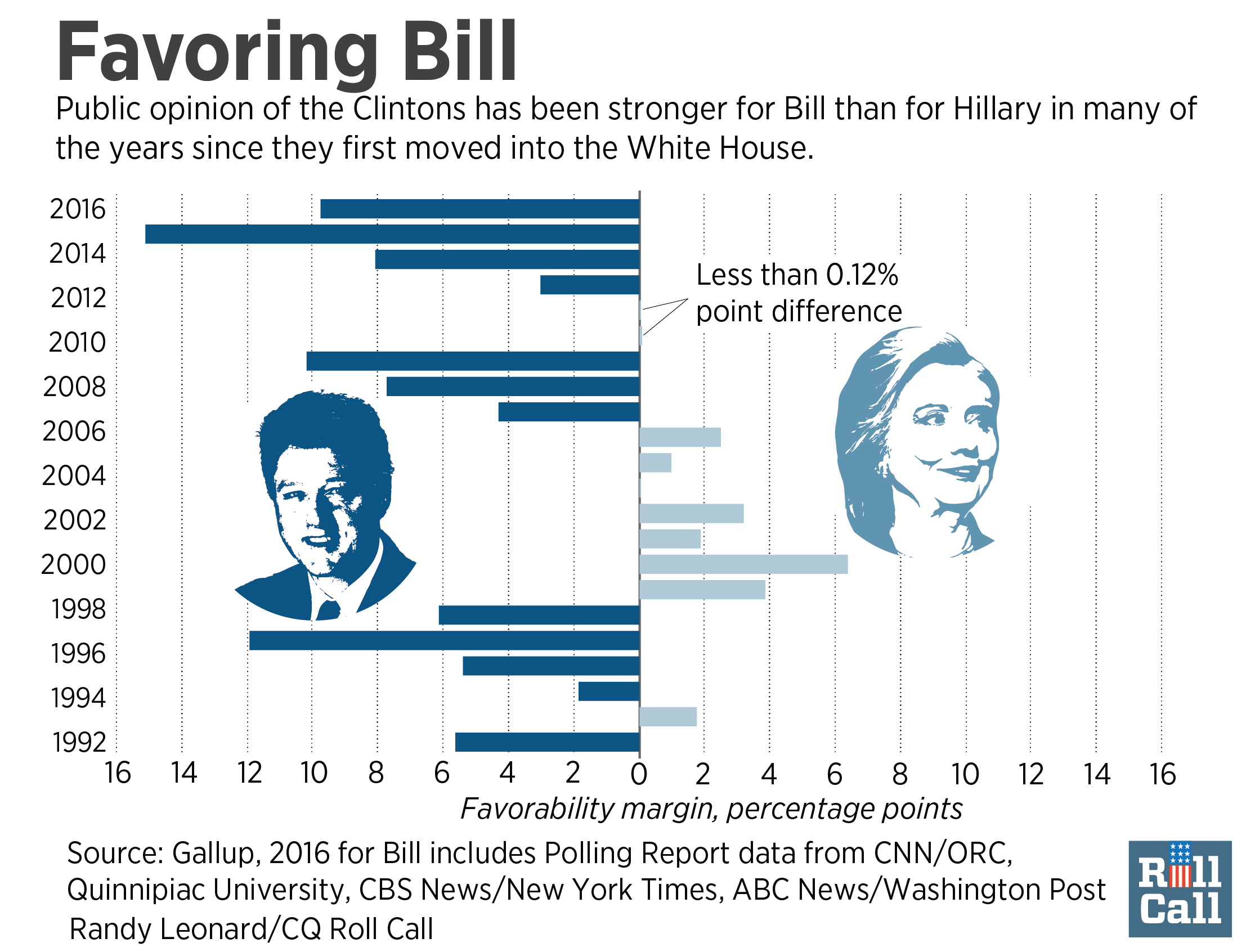 Charlie Brotman, the longtime emcee for presidential inaugurals, was also in attendance at that same Leisure World event. He said afterward, “If he were to run, he’d win,” notwithstanding the constitutional prohibition on a third term. “Hillary may be the second-best thing.”

Buchler says the spouse of a candidate is typically not much of a factor in determining how people vote, particularly when gauged against broader trends like the state of the economy.

But this election is anything but typical.

“We have so many unusual factors in this election,” he says. “We don’t know what effect a past president will have on a spouse who is a candidate.”

Neither, for that matter, is there confidence about what sort of effect the Republican nominee, Donald Trump, might have on perceptions of Hillary Clinton.

“Donald Trump,” Buchler says, “is the real deviation in this election cycle.”

Another consideration is how much sway a convention will have in forming opinions of the Clintons, or Trump for that matter. These are, after all, people who have been in the public eye for a long time.

“I don’t know if there is so much a danger that Bill Clinton will overshadow her, but the thing about conventions is, they’re public events, launching events,” Niebler says. “Who is there left to launch a general election to?”

Bill Clinton’s performance under the convention spotlight or on the stump isn’t as much of a concern in this context, the argument goes, because people know what they’re getting.

“Perhaps more dangerous for her is whether he’ll go off script,” Niebler says.

David Coates, who holds the Worrell Chair in Anglo-American Studies at Wake Forest University, says stylistics might be the least of the Clintons’ concerns when it comes to consolidating the Democratic vote and generating enthusiasm.

“For her, he does have the potential to be a loose cannon,” he says. “She has a political problem with managing him,” he adds. Witness Bill Clinton’s recent impromptu visit with Attorney General Loretta Lynch at Phoenix Sky Harbor Airport, just a short period of time before the Justice Department was set to announce whether it would seek criminal charges against Hillary Clinton in connection with her use of a private email server when she was secretary of State.

But it’s the former president’s political legacy that Coates thinks might be the bigger liability for the candidate.

While Clinton’s time in office in the 1990s might frequently be invoked as a time of economic growth and budget surpluses, Coates says one of the key animating issues of the Democratic primary has been the fallout from the deregulatory agenda of that time.

“She hasn’t just got to separate him from her, but also the economic programs, such as deregulation of the financial sector, which is what Bernie Sanders has been criticizing her for,” he says, adding that Hillary’s offer to put Bill in charge of the economy might be worth rethinking.

Regardless, Coates agrees that, at least in American politics, the Clintons put the electorate in uncharted territory.

“Hillary Clinton is learning a role, but so is her husband. Playing the male partner to a leading woman politician is a difficult role,” he says, citing Great Britain’s experience with Margaret

Thatcher and even the new prime minister, Theresa May.

“I think Bill Clinton will do his level best to behave. But the question is, will he?”

However it plays out in Philadelphia and later on the trail, one thing is certain: Bill Clinton will be news.

“She needs him to energize the crowd,” McBride says, adding that “I’m sure there’s a lot of creative thinking going on among convention planners,” about the former president’s role.

That would encompass his appearance on Tuesday with grieving African-American mothers. Blacks are a key voting bloc for Democrats and were a constituency Hillary Clinton leaned on heavily during the primaries.

Record turnout among blacks also helped Barack Obama win twice and she wants to retain that level of support. Bill Clinton, during his presidency, had a good rapport with black voters, so his role at the convention makes sense.

When it comes to another crucial Democratic constituency, though, women, Hillary Clinton is better off touting her own virtues.

And she has, with aplomb. One of Hillary Clinton’s best convention moments came in 2008 when she addressed the gathering after losing to Obama.

“To my supporters, my champions — my sisterhood of the traveling pantsuits — from the bottom of my heart: Thank you,” she said before recalling the long struggle for women’s voting rights in America.

“My mother was born before women could vote,” she said. “But in this election my daughter got to vote for her mother for president.”