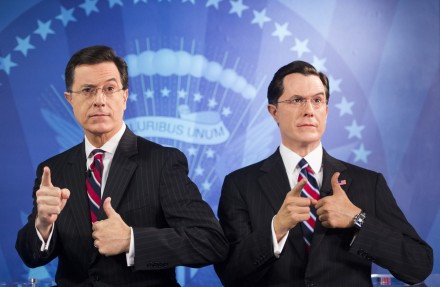 "He did?!" the congresswoman exclaimed, a smile spreading across her face when CQ Roll Call informed her of the news in the Speaker's lobby.

Prime time for "The Colbert Show" host, who has declared Norton his "nemesis," could mean more prominence for the push to make D.C. the 51st state.

"I can only hope that Colbert knows that the District of Columbia contributed to his elevation," Norton said, "while he was doing all he could to deprecate the residents of our city for not having the same rights that he has."

Norton vowed to hold him to accountable and demand that he make amends in his new role.

She had just finished a 30-minute speech on equality for the District, the culmination of a week-long campaign from the House floor planned to raise awareness for the cause in advance of D.C. Emancipation Day on April 16. The holiday, meant to cast D.C.'s disenfranchisement as a civil rights struggle, commemorates the day in 1862 when President Abraham Lincoln freed 3,100 enslaved African Americans in the District.

"Even 150 years after D.C. led in the emancipation of slaves, no other country limits the rights of citizens because they happen to live in their nation’s capital," Norton said in her speech, pointing to a floor chart about the recent United Nations Human Rights Committee's recent report decrying D.C.'s lack of voting rights on Capitol Hill.

Her props included a floor chart showing that the District's population of nearly 650,000 is greater than that of two states, Wyoming and Alaska, who have voting representatives in Congress, and another showing D.C. residents pay more federal taxes per person than the residents of any of the 50 states.

Asked if she might take the floor charts along with her next time she talks to Colbert, Norton said they might be a good prop.

"Those flow charts might help me since he has the microphone to talk back to him in ways that he will not be able to rebut," she said.