Washington, D.C. residents crowded into a hearing room in the Dirksen Senate Office Building Monday to witness the first hearing on D.C. statehood in two decades, though enacting statehood in the 113th Congress is not likely anytime soon.

Sen. Thomas R. Carper, chairman of the Homeland Security and Governmental Affairs Committee, facilitated the hearing, fulfilling a promise that the Senate would consider D.C. statehood in the fall.

But at the end of the hearing, Carper searched for viable solutions other than statehood, asking the second round of panelists, "What should we be able to agree to?" Budget and legislative autonomy, along with legislation granting D.C. residents voting representatives in Congress, were among the solutions offered. However, proponents of statehood argued those solutions would fall short of addressing the problem of lacking the same rights as citizens in other states and being beholden to congressional oversight.

Del. Eleanor Holmes Norton, D-D.C., said she understood why Carper was asking for alternatives to statehood.

"Even if [Carper] were to get this bill passed, he knows that the House is not prepared to do it," Norton told CQ Roll Call after the hearing. "So he’s acting like a senator who says, ‘If I can’t get exactly what I want, I’m going to go get something for my constituents.’"

Norton added, "And I think residents appreciate that because budget autonomy and legislative autonomy have overwhelming support in the city and in the council," she said. "It’s just that we know that if we got them both, we’d still be second-class citizens.”

Under a provision enacted in the fiscal 2014 appropriations bill, even if the House and Senate do not pass a continuing resolution to fund the government, the District government will be able to continue to spend its own local funds and will not shut down.

Pending 2015 appropriations bills in the House and Senate include similar language that would allow D.C. to remain open even if the federal government shuts down.

But the notion of anything short of statehood drew criticism from most of the panelists and audience members, many of whom donned red T-shirts and "D.C. Statehood buttons."

When Carper asked his final question, many residents in the audience shook their heads, with one woman smacking her forehead with the palm of her hand out of frustration.

But statehood was the main focus of the hearing, which lasted roughly two-and-a-half hours.

Only one other senator, ranking member Tom Coburn, attended the hearing, though the Oklahoma Republican left roughly 35 minutes in.

Norton and other D.C. officials, including Mayor Vincent Gray and D.C. City Council Chairman Phil Mendelson, testified on the first panel of witnesses. They all emphasized D.C.'s ability to handle its own governance and cited the difficulties of being governed by Congress. 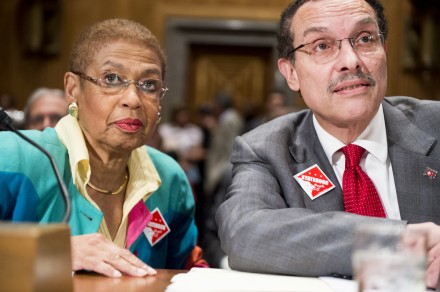 The District has “been subject to the political whims of Congress,” said Gray, pointing to the partial government shutdown last October when the district had to scramble to keep the city functioning.

They also emphasized the economic state of D.C., pointing to its economic growth as proof that it would be a viable state.

Senior Brookings Institution Fellow Alice Rivlin, the founding director of the Congressional Budget Office and an expert on fiscal policy, spoke about the subject on the second panel.

She addressed the 1990s-era federally appointed Financial Control Board, which she chaired for its final three years. Rivlin explained the vast improvements to the city’s economy since then and its “vibrant urban economy” with a bigger gross domestic product than 16 states.

The CATO Institute's vice president for legal affairs Roger Pilon was the lone dissenter on the panel, which also included Viet D. Dinh, a Georgetown Law professor; Wade Henderson, president and CEO of The Leadership Conference on Civil and Human Rights; and the District's two "shadow senators," Paul Strauss and Michael D. Brown.

Pilon argued that granting D.C. statehood would be “both unconstitutional and unwise.” He argued that one solution would be eliminating federal taxes for D.C. residents as a counter to the "taxation with representation motto."

So, though D.C. statehood is not likely to happen this Congress, Norton said having a hearing on the subject boosted the movement.

"There’s excitement in the city, just from the notion that we were able to get an official hearing in the Senate of the United States," she said. "That’s about the most you could’ve done in this Congress."

Clark Mindock contributed to this post. Roll Call Election Map: Race Ratings for Every Seat Get breaking news alerts and more from Roll Call in your inbox or on your iPhone.