"Top Chef" judge and anti-hunger advocate Tom Colicchio has some choice words for members of Congress when it comes to the farm bill: "Just say no." 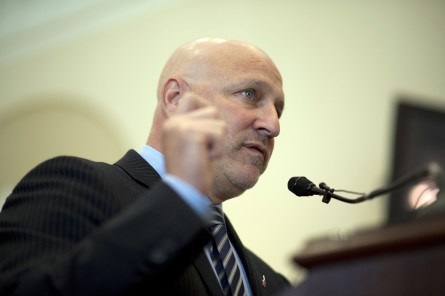 The Senate Agriculture Committee is planning a May 14 markup of the reauthorization of farm and nutrition programs, while the House Agriculture Committee is eyeing a May 15 markup. Last year, lawmakers passed a one-year extension of current programs that expires Sept. 30. The panels are looking at cutting anywhere from $20 billion to $35 billion from farm programs, and SNAP is likely to be a big target.

"We shouldn't be starting at the zero level. We should be looking to invest in these programs," Colicchio said, citing as evidence several people in the audience of about 50 members, staffers and citizens who had become productive members of society thanks to social welfare initiatives such as food stamps. "We need to move this away from being about welfare to one of investment in the future."

And to that end, he urged the defeat of the farm bill. He acknowledged that the audience was a Democratic-heavy one, but said that given the party's numbers in the Senate, and the fact that some ultra-conservative Republicans in the House would vote against it, it was eminently doable. "I think we're better off not passing the farm bill. The status quo is better than cuts," he said.

Colicchio has a strong ally in Rep. Jim McGovern, D-Mass., a co-chairman of the Congressional Hunger Caucus and member of the Agriculture panel, who said if SNAP is cut too deeply, "What we need to do is, we need to vote no ... if you vote for that, you make the problem worse."

Colicchio, the founder of Craft Restaurants and lead judge on Bravo TV’s mega-hit “Top Chef," has become a familiar presence on Capitol Hill regarding hunger issues in recent years. Earlier this year, he was executive producer of "A Place at the Table," a documentary about hunger in America that was co-directed by his wife, Lori Silverbush, and Kristi Jacobson.

Save for later
Topics: fightingwords food