Italian-American members of Congress broke bread with Claudio Bisogniero, Italy's ambassador to the United States, on Thursday at a Capitol Visitor Center lunch. 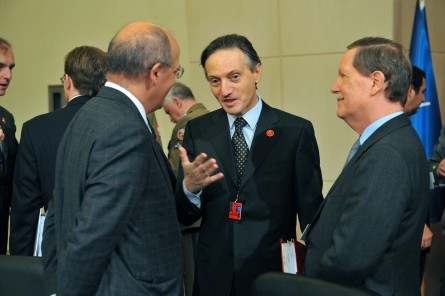 “For those of you who haven’t met him, he speaks incredibly good English, better than many of my constituents and certainly better than Pascrell’s constituents,” said Rep. Pat Tiberi, R-Ohio, ribbing himself and Rep. Bill Pascrell Jr., D-N.J.

The forum added to a campaign launched by the president of the Italian Republic, Giorgio Napolitano, who assigned the ministry of foreign affairs and embassy of Italy in Washington a year-long project to connect America's and Italy’s political, economical and cultural worlds.

You can see the ads for “Italy in US 2013” in Union Station, hanging from the ceiling outside of retail store H&M.

More than 300 events have taken place across the country, covering topics from music and interior design to brand name apparel and wine. Approximately 80 museums and universities have partnered in raising awareness of the influence Italy has had on American culture.

Bisogniero plugged completion of the Transatlantic Trade and Investment Partnership by the end of 2014 as critical for substantial growth in Italy. He also noted that approximately 4.5 million Americans visit Italy each year. Capitalizing on positive relations between both countries, he said, is in the best interest of everyone.