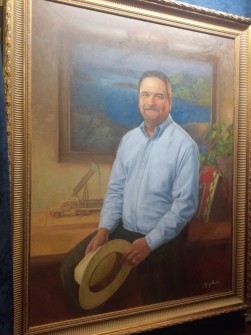 “It’s like old House day!” one enthusiastic supporter who had gathered for the unveiling of Pombo’s official portrait sputtered while snaking through the flood of familiar faces. “After I left, I wasn’t coming back,” the seven-term lawmaker told assembled well-wishers about his short-lived plan to make a clean break from #ThisTown. Instead, he became a partner at Gavel Resources here in Washington — though he insists his first love is, and will always be, tending to his family’s cattle ranch.

“That’s what I did before I became a member and after,” he told HOH.

Speaker John A. Boehner popped by the chummy celebration, replete with an open bar and loads of cocktail meatballs, to praise a man whom he said never relented in the ultimately fruitless fight to rewrite the 1973 Endangered Species Act. 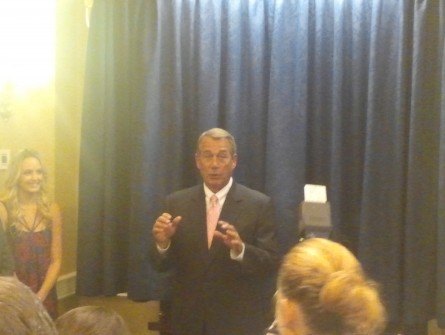 “A giant member, a tenacious member … Richard, God bless ya,” the Ohio Republican told all those present.

Pombo said he instructed the artist commissioned to capture his visage to work in as many aspects of his work on the committee as possible, while still keeping things casual.

The end product shows the California Republican perched on his desk, cowboy hat in hand, collared shirt slightly open, posing in front of a picture of the Shasta Dam. There’s a pair of cows perched above the embedded landscape, as well as model logging trucks and oil tankers off to one side and a colorful Native American blanket draped over the desk chair.

Committee aides also pointed out that the Pombo family brand — yep, the one they actually use to mark their herd — is monogrammed onto his left shirt cuff.

While happy to facilitate the happy reunion, current Natural Resources Chairman Rob Bishop, R-Utah, did not shy away from pulling rank on his former peer. 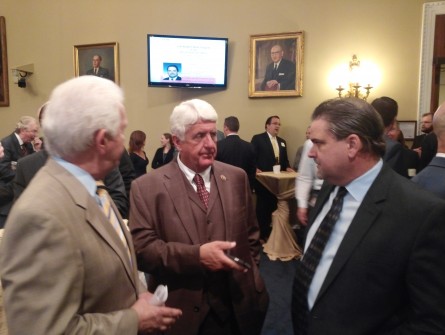 “You have to be nice to me because I still get to decide where this is hung,” he joked during the ceremony.

Related: Pombo Move Sets Up Bloody Primary Fight Richard Pombo: A Once And Future Congressman? Abramoff Gets Nearly Six Years See photos, follies, HOH Hits and Misses and more at Roll Call's new video site. Get breaking news alerts and more from Roll Call in your inbox or on your iPhone.