A HOH tipster watched in horror Wednesday as the D.C. delegate , 77, awkwardly forced her way into a wide-open spot in the carefully controlled corridor of New Jersey Avenue Southeast sandwiched between the Longworth and Cannon House Office buildings. 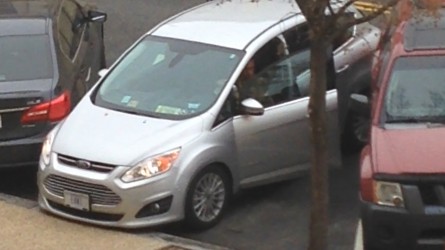 “If she parks like that she should not be a member of Congress anymore,” one mystified observer — who wisely recorded more than a minute of the automotive travesty — said as the video was being captured. The tipster said Norton rubbed the correctly positioned, red sports utility vehicle to her immediate left with her improperly angled silver sedan.

Per our tipster, Norton performed the sub-par squeeze-in around the same time the rest of her colleagues were crowding into the House chamber to hear the joint address by Afghan President Ashraf Ghani .

At around the 40-second mark, an oblivious U.S. Capitol Police officer appears to zoom by on a motorcycle, right past the textbook parking offense.

Once the aide seen assisting Norton from outside the slow-moving vehicle finishes waving her into clearly disastrous position, Norton emerges from the car, clicks her remote-locking device (better safe than sorry) and starts to walk away.

Then, all of the sudden, she doubles back.

Has her conscience gotten the best of her? Is she going to slide a quickly composed apology onto the now-stuck truck’s windshield? Or perhaps a business card?

Norton simply retrieves some forgotten item from inside the car and then heads on her merry way.

Our spy estimates the entire head-scratching episode lasted about half an hour, including the painful insertion process and her 20-minute jaunt into Cannon.

Once done with her business, the tipster said Norton backed out of the space and rolled out onto the unsuspecting District streets.

"She hit the car next to her and did not leave a note, though I couldn't see any damage," was our spy's takeaway from the mid-day drama.

“After the Congresswoman parked her car, we assessed the cars on either side to see if there was any damage. We could not find any,” a Norton aide assured HOH. “But we left a note with a business card so the congresswoman could be contacted in case we missed any.”

According to Team Norton, the congressional staffer who owns the truck that was boxed in by the septuagenarian pol reached out to her office about the videotaped scrape.

“The Congresswoman heard from the owner of the only car she was close enough to damage. The owner reported no damage,” a Norton spokesman said via email.