Updated: 5:30 p.m. | Capitol Police dashed the weekend fun being had by neighborhood youngsters because one congressional leader appears to be a stickler for decorum.

Following the second wave of white stuff dumped on Washington, D.C., in just a few days, an HOH tipster said sled-toting families on Feb. 21 braved the frigid temperatures for a chance to feel the sting of kicked-up slush and whipping winds while zooming down the West Front of the Capitol. 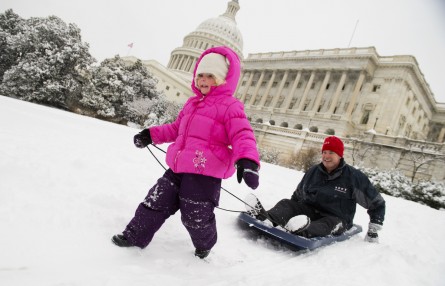 Until a Capitol Police officer begrudgingly brought the seasonal merriment to a screeching halt. “When I questioned the officer about this, he said it has been prohibited for years, but Capitol Hill Police have been looking the other way. I asked him why they were changing now? He said Congress was insisting they enforce the ban,” the fun seeker told HOH.

According to media reports , the cops who booted floppy hat-wearing folks from the Hill earlier in the week told revelers they were doing so under the banner of national security.

This time, however, the crackdown was all about keeping up appearances.

When our source further pressed the seemingly conflicted officer (“He was very sympathetic to the sledders,” our spy said), the law enforcement official said a lawmaker had formally complained.

“He replied it was the head of the appropriations committee who insisted on enforcement because he did not like the appearance of having the public sled next to the Capitol,” the distressed party shared via email.

An aide to House Appropriations Chairman Harold Rogers told HOH the Kentucky Republican hasn’t mentioned sledding to the Capitol Police; aides for Senate Appropriations Chairman Thad Cochran, R-Miss.,  also disavowed any involvement in shutting out tobogganing enthusiasts. “The Senator has not weighed in on the sledding issue with the U.S. Capitol Police or any other authorities,” Team Cochran assured HOH via email.

Who knew that sledding — rather than, say, barreling down major roadways adjacent to the Capitol — would be the slipperiest of slopes for the Capitol Police to navigate?

Related: Capitol Police Chief's Leadership Questioned The 114th: CQ Roll Call's Guide to the New Congress Get breaking news alerts and more from Roll Call in your inbox or on your iPhone.