Really Rich and Endangered: 50 Richest on the Ballot

Will their ranks on the 50 Richest Members of Congress list hurt Hagan or Warner this fall? (CQ Roll Call File Photo)

This week’s unveiling of the 50 richest members of Congress , a signature Roll Call annual report, will underscore the recent reality that about 10 percent of the nation's lawmakers are in the 1 percent when it comes to their net worth.

Another reminder that so many members are so much wealthier than their constituents surely won’t do anything for already abysmal congressional approval ratings (an average 14.3 percent in half a dozen national polls since July 4). To most of the electorate, the roster will be just another annoying reminder of a Capitol Hill that too often seems out of touch.

So the only potential suspense is about whether the revelations of riches will complicate the campaigns for the handful of endangered incumbents on the list. The answer is almost certainly not.

Four Democrats in competitive races have investment assets that exceed their debts by more than $9 million. Each of them is bidding for a second term.

The fifth richest member of the 113 Congress, Sen. Mark Warner of Virginia, made a fortune currently worth north of $95 million on his 1980s gamble that Americans would fall in love with the cellphone. California Rep. Scott Peters is No. 9 — not only because of his success as an environmental litigator in San Diego, but because his wife runs a lucrative private equity operation. Rep. Brad Schneider (the Illinois lawmaker is No. 34) was a highly successful business consultant and life insurance salesman back in the Chicago suburbs. And Sen. Kay Hagan of North Carolina (No. 41) has profited handsomely from her father’s commercial real estate empire in Florida.

The only really rich Republican who’s breathing hard on the campaign trail this fall is Senate Majority Leader Mitch McConnell (No. 32). He’s been extraordinarily comfortable for the past six years, thanks to a $5 million gift from his father-in-law, a shipping and importing magnate.

Among those five, however, so far only McConnell has seen his wealth wielded against him by an opponent. During the August recess, Kentucky’s Democratic Secretary of State, Alison Lundergan Grimes, unveiled a television spot declaring that no senator who “can become a multimillionaire in public office” should be re-elected after a career opposing minimum wage increases, blocking jobless benefits and pushing “tax breaks that send Kentucky jobs overseas.”

(Check out profiles of the full list. The special report on the annual study of congressional wealth will be printed in Tuesday’s Guide to Congress.) Grimes’ implication, that McConnell leveraged his public trust for personal gain, is clearly contradicted by the Senate financial disclosure forms detailing the generosity of James Chao, father to former Labor Secretary Elaine Chao, who married the senator 21 years ago. So if the challenger’s message sticks a little nonetheless, it will be because it reinforces her “30 years is enough” campaign theme — not because she’s out to contrast his wealth with her poverty. (Grimes is an attorney who lives in country club comfort in Lexington; her candidate financial disclosure, filed a year ago, showed a minimum net worth of $380,000. Her investment assets, split between securities and rental property, were worth at least $425,000 but the family credit card balances topped $45,000.) 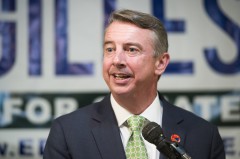 None of the four GOP challengers to the richest Democrats, meanwhile, can plausibly portray himself as living in humble circumstance — though most are self made. Virginia’s Ed Gillespie may have parked cars in the Senate garage in his youth, but he’s made oceans of rain as a K Street lobbyist. San Diego’s Carl DeMaio went to Georgetown on scholarship but had started and sold a pair of companies before he turned 34. North Carolina’s Thom Tillis is the son of an itinerant boat draftsman, but got himself on the fast-track at PricewaterhouseCoopers. Only Bob Dold, who’s seeking a comeback to the House from Illinois, was born into relative privilege; his family business claims to be the oldest pest control company in the country.

In other words, no really well-off member of Congress is in electoral trouble this year because the challenger’s economic circumstances stand in dramatic contrast.

But there are other, perhaps more important, reasons why no member is confronting personal wealth as a major political handicap.

Scions of the landed gentry have been winning election to Congress since the beginning, and self-made entrepreneurs have been having similar success for the past century, not only because they could easily buy their seats but also because they could readily demonstrate to voters why they were incorruptible. With their own pockets already well-lined, the richest politicians imply, even when they don’t downright say so, that they have no need to skirt the ethics rules and no personal motive to trade their votes for future considerations.

A slogan that captures the concept, “Nobody’s senator but yours,” has been around for decades. It was most recently deployed by Herb Kohl, whose stake in the family grocery and department store empire allowed him to spend a combined $18.5 million to win three terms as a Democratic senator from Wisconsin — and still have a net worth of more than $10 million when he retired two years ago.

Affecting an unpretentious personal style is also another best practice of the richest lawmakers, especially those without safe holds on their seats. Kohl, who won his first election by just 4 points, liked to take meetings at diners in Milwaukee and drove a decade-old Chevy Lumina to work at the Capitol. Sen. Jay Rockefeller, the  West Virginia Democrat whose surname is a synonym for extraordinary wealth, worked to cement his initially tenuous political standing in one of the poorest states by describing himself as an ordinary guy with ordinary tastes. (He says his ideal evening features a plate of lima beans and the Atlanta Braves on TV.)

Rockefeller is retiring this year as the richest person in the Senate, with a minimum net worth above $108 million, so he doesn’t have to rhapsodize about beans and baseball anymore if he doesn’t want to. But for the congressional 1-percenters appearing on a 2014 ballot, tapping their champagne budgets for nothing more than a draft beer persona will continue to make obvious political sense.

NEW! Every Single Member of Congress, Ranked by Net Worth