Members in Waiting: The 20 Candidates Headed to D.C.

Perhaps by design, and maybe because of circumstance, Jim Risch remains among the least recognized senators after almost six years on the job. But, given the course of his path to Congress, he was at a big disadvantage from the start — if getting noticed was his desire.

In a place where fascinating back-stories and dramatic arrivals count for much, Risch had neither. He sailed to the Senate without suspense, a very conservative Republican claiming an open seat in very conservative Idaho in 2008, when the national political story was the big Democratic year. His credentials included a reputation for resilience and three decades as a power broker in his state house, but he was overlooked from the start and since then has rarely come off publicity’s back bench.

Risch’s underwhelming first-term impression illustrates one of the odder paradoxes of today’s congressional culture: The easier time a candidate has getting to the Hill, the tougher time that new lawmaker has getting noticed upon arrival.

The incumbents, staffers, operatives, lobbyists and reporters who make up the capital’s political class spend almost all their time at the water cooler handicapping the tight races and getting to know the would-be giant killers and takeover engineers. And those winners get disproportionate attention at the start of their congressional careers. Generally, that comes at the expense of the freshmen who got to Washington without breaking a sweat the previous fall.

The phenomenon comes to mind now that this year’s House and Senate nominees have been finalized in more than half the states — yielding a roster of 20 candidates for open seats who are, in effect, already on their way to the 114th Congress. Because of their constituencies’ demographics and solidly reliable partisan voting history, securing the party nomination in their districts or states is tantamount to winning the general election. 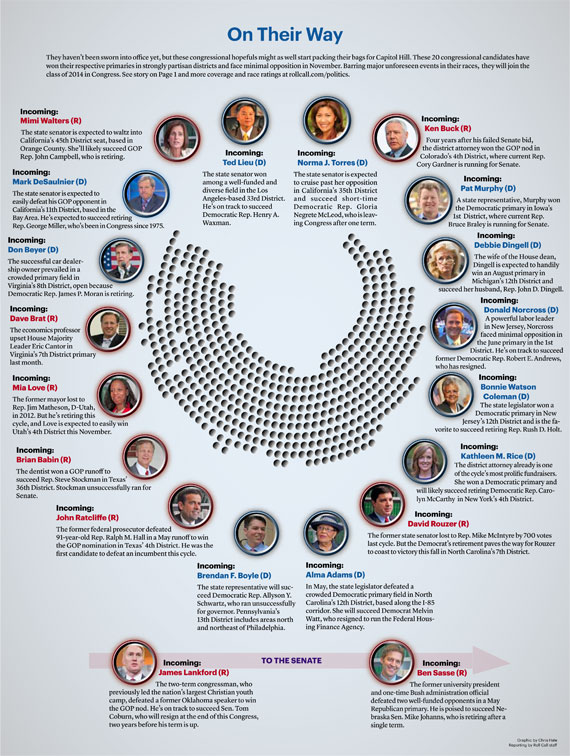 Ten more de facto members of the Class of 2014 will be anointed in primaries and runoffs in seven states between next week and Labor Day. This means that fully 10 weeks before Election Day, the House will know the identities of more than one-third and perhaps more than half of the men and women who will become members for the first time in January. (That’s assuming the current playing field of 50 competitive contests does not expand much, a good bet at the moment.)

There are already two virtually guaranteed newcomers to the Senate — both politically experienced, sometimes wonky 40-something Republicans with solid credentials on the Christian right who have laid claim to open seats in the solidly red Great Plains. Although the tea party movement backed Midland University President Ben Sasse in Nebraska but not Rep. James Lankford in Oklahoma, their brands of fiscal and cultural conservatism should allow both of them to fit right in to the new mainstream of the Senate GOP conference.

A third Republican, former Gov. Mike Rounds of South Dakota, is the decided but not quite prohibitive favorite to win the other open Senate seat in the Plains, but no would-be Democratic senatorial newcomer has more than a tilting-his-way advantage .

On the House side, by contrast, the vagaries of the political calendar mean there are more Democratic candidates (11) who are already slam dunks to come to the Hill than Republicans (7). By the time the primaries end, the rosters will be about even.

Taken as an unscientific and incomplete sample, the backgrounds of those who are already virtual members of next year’s freshmen class suggest the demographics of the new Congress will be only slightly altered from the current one.

The biggest difference: The average age of the newcomers is 51, while the average age in the House was 57 when the 113th convened. Because a score of members older than 65 are exiting this fall, the next House looks very likely to be measurably younger.

The youngest de facto member-elect is 37-year-old Democrat Brendan F. Boyle of Philadelphia. The youngest Republican is central Utah’s Mia Love, who will turn 39 a month before taking office. As the first black female Republican ever in Congress she will be an exception to the notion that people who ease into Congress get less press attention.

Love's party has been holding her up to the national spotlight — including a plum convention speaking slot — since her initial race in 2012. (She lost by 768 votes to Democratic Rep. Jim Matheson, whose pending retirement has assured her assent.) Love is among four surefire winners (all Republicans) with congressional losses in their past. One of them, Brian Babin, is making an easy comeback in east Texas almost two decades after failing in back-to-back contests. Next year, he will join a roster of more than a dozen members who finally won a seat after multiple unsuccessful campaigns.

Except for Love and Mimi Walters of California, the early crop of House Republicans is all white men, who also account for 90 percent of today’s GOP conference. But on the Democratic side, just five of the 11 are white men — an echo of the symbolic marker passed in 2013, when for the first time the Democratic Caucus did not have an Anglo male majority.

But what the incoming Democrats have in demographic variety they largely lack in career diversity. Eight are currently state legislators, with more than 95 years of combined tenure. Don Beyer of Northern Virginia was lieutenant governor for eight years in the 1990s, while Kathleen M. Rice of Long Island has been the elected district attorney of her county for a decade.

Which leaves only one Democrat on the way to Congress without time in traditional elected office — and even that candidate, Debbie Dingell of Michigan, had to technically win an election to become a trustee of Wayne State University. (She arguably learned more about federal elections and policymaking than the others as a top voice in Washington for General Motors for three decades and the wife of the outgoing dean of the House, John D. Dingell.

The résumés on the GOP side are a bit more varied. Four have paid their political dues in the traditional way — as state legislators or prosecutors. Three can boast as their highest elected office being mayor of a small town: Love, Babin and Texan John Ratcliffe. Just one is the sort of genuine political outsider who has gained a toehold in Congress because of the tea party’s rise: Dave Brat, the economics professor who upset Majority Leader Eric Cantor in the Virginia primary.

Three of the 20 safe bets have also done time as congressional aides — matching the ratio in the current Congress, where 1 in 7 members was once a staffer . All are Republicans: Sasse spent six months in 2005 as chief of staff to Rep. Jeff Fortenberry of Nebraska, David Rouzer of North Carolina worked for both his state’s senators between 1996 and 2001, and Colorado’s Ken Buck was a staffer in 1986-87 on the select House committee that investigated the Iran Contra morass.

But not one of them mentions military service in their biographies — another signal that, while care for veterans and the threat of war are both campaign issues this year , the share of people in Congress who have worn the uniform (19 percent now) will continue its longstanding decline.

Related stories: Roll Call Election Map: Race Ratings for Every Seat Get breaking news alerts and more from Roll Call in your inbox or on your iPhone.