After McCarthy's Stunner, Republicans Who Could Be Speaker (Video)

Updated 5:26 p.m. Rep. Kevin McCarthy's stunning decision to withdraw his name from the race for the speaker's gavel has set off chaos in the Republican conference, with all sorts of names being floated of people who could potentially be the next speaker. Speaker John A. Boehner, R-Ohio, has announced his plans to stick around until his successor is elected, and that's what will happen for now: Boehner would only have to win a vote to vacate the chair if conservatives pressed one. Otherwise, he can stay for the duration.

Here are the people who just might have the ambition for the job, although at this point, almost anybody could get a mention as chaos reigns:

Oversight and Government Reform Chairman Jason Chaffetz, R-Utah.  At least we know he wants the job. In a conference where nobody seems to want to step up for the gavel, Chaffetz threw his hat in the ring over the weekend as McCarthy was stumbling over his Benghazi gaffe . But several lawmakers have already questioned whether he could unite the conference, and before McCarthy bowed out, colleagues expected he had in the range of 200 votes against Chaffetz and the other man in the running, Daniel Webster of Florida.

Financial Services Chairman Jeb Hensarling, R-Texas. Hensarling has flirted with runs before, but demurred this time around. He'd potentially have support from the sizable Texas delegation and was causing trouble for the likes of Boehner long before the tea party came along.

Hensarling’s impeccable conservative pedigree includes vigorously opposing the Wall Street bailout championed by Boehner. He led the conservative Republican Study Committee and has been among the most hawkish of senior members on fiscal issues for years. He’s also served in leadership roles as both conference chairman and as the finance chairman for the National Republican Congressional Committee.

When CQ Roll Call asked him in a hallway recently if he'd rule out running for speaker in the future, he declined to do so. 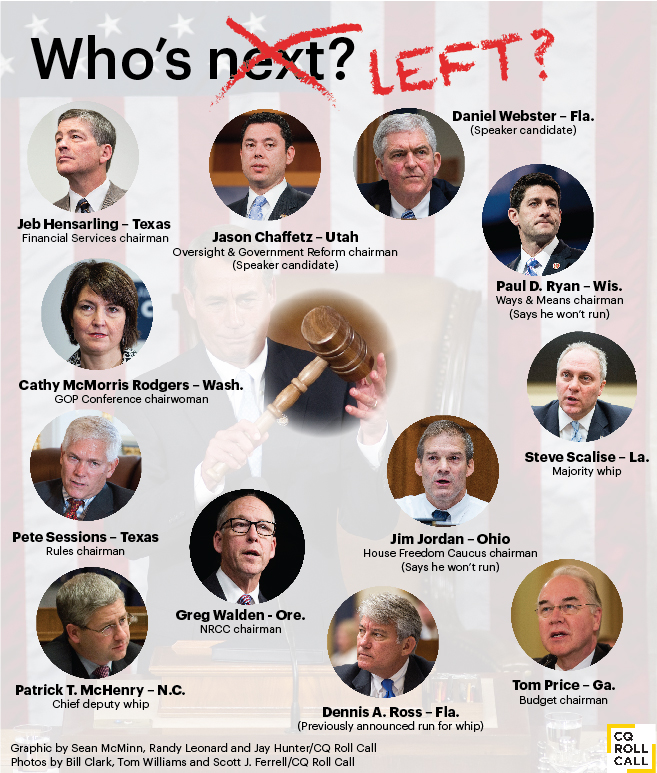 Peter Roskam, R-Ill. The former chief deputy whip has seemed to be preparing himself for a return to the leadership table and fought against a quickie ascension of the existing leadership team , although he didn't actually run for a leadership position himself.

Majority Whip Steve Scalise, R-La. Scalise is next in line, already has a whip operation and a pedigree from the Republican Study Committee. He's also become the White House's favorite target, with Josh Earnest regularly using the "David Duke without the baggage" line.

Tom Price, R-Ga. The Budget chairman and former RSC chairman has friends in high places — getting endorsements for majority leader from Paul D. Ryan and Hensarling. He hails from the vote-rich South and maintains an outsider’s appeal, even if he’s on the inside of most policy discussions. Like Hensarling, he opposed the Wall Street bailout and once led the Republican Study Committee. An orthopedic surgeon, he also led the Republican Policy Committee in the 112th and has wonk cred.

He previously ran for chairman of the House Republican Conference , the No. 4 position in GOP leadership, but was defeated by the more moderate Cathy McMorris Rodgers of Washington.

He put out a statement calling for the election of a speaker who would serve for the rest of the Congress with full leadership elections to follow in November of next year.

Daniel Webster, R-Fla. Webster appeared to be cannon fodder for McCarthy, but he's already in the running.

Pete Sessions, R-Texas. He hasn't thrown his hat in the ring yet and it's not clear if he will. But the Rules chairman had been working hard in his run for whip. If others don't step up, he might be tempted — or pushed.

Lynn Westmoreland, R-Ga., told CQ Roll Call he is considering a run for speaker — along with about 20 other people — and will likely be making calls this weekend. But he cautioned he hasn't yet spoken to his wife and kids yet.

Another idea floating out there is electing some kind of interim speaker, although exactly what that means is not clear. The names mentioned include Tom Cole of Oklahoma , a top defender of the Boehner regime (and therefore someone likely to have the same problems on the right), retiring House Administration Chairwoman Candice S. Miller of Michigan , retiring Education and the Workforce Chairman John Kline of Minnesota , or current NRCC Chairman Greg Walden of Oregon . Walden said Thursday he "would consider" running for interim speaker.

Other possibilities floated, and already shot down include:

Ryan of Wisconsin : The former vice presidential candidate and Ways and Means chairman could probably waltz into the office if he wanted. But he doesn't want. So much so that he sent an immediate statement to that effect. He cites his children regularly as a reason why he doesn't want the post.

Trey Gowdy of South Carolina : A favorite of the GOP base, the chairman of the Benghazi select committee has repeatedly said he does not have what it takes to be the leader and does not want the job. He shouted "No!" at reporters as he entered an elevator.

Harold Rogers of Kentucky : The venerable Appropriations chairman had been suggested by some as a possible caretaker speaker. "I'm not the person for that job," Rogers said.

Jim Jordan of Ohio : The House Freedom Caucus stalwart said he has no interest in running for the job.

Armed Services Chairman Mac Thornberry  of Texas has no interest in the speakership, per a spokesperson.

Have a name to float? Leave one in the comments.