How else to explain a state where the white Republican governor takes down the Confederacy's many flags and declares it time to raise taxes while a black Democratic congresswoman argues against changing the name of a bridge named after a Confederate general and Ku Klux Klan grand dragon.  When the latest battle over Confederate States of America imagery burst on the scene, Alabama Gov. Robert Bentley acted quickly, pulling down Confederate flags at the state Capitol. That action came on the heels of the state's debate over the name of the Edmund Pettus Bridge, hallowed ground for the civil rights movement but problematically named.

The congresswoman who represents Selma, Ala., home to the bridge that was the site of the 1965 Bloody Sunday clash between civil rights marchers and Alabama police and vigilantes, says the bridge has transcended such tumult, though it is named after Pettus, a former Democratic senator from Alabama.

"That flag did then and does now symbolize the fight for slavery and white supremacy," Rep. Terri A. Sewell told CQ Roll Call, referring to the Confederate battle flag that flies above the South Carolina capitol, is incorporated into the Mississippi state flag and has for decades provoked strong reactions since its renaissance amid the civil rights movement's stirrings.

It was a move that went further and came swifter than what was transpiring in South Carolina and Mississippi, where statewide officials called for battle flag imagery and its display to be curtailed in the wake of the June 17 slayings of nine people at the Emanuel African Methodist Episcopal Church in Charleston, S.C. In the U.S. Capitol, the House will debate resolutions about the propriety of displaying on campus Mississippi's flag, which contains the CSA battle flag , as well as other Confederate imagery. 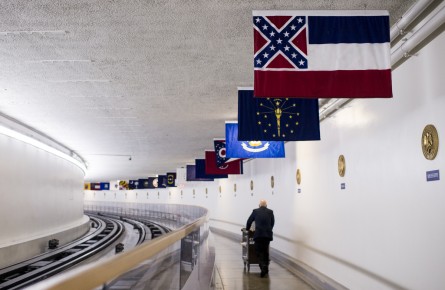 Lawmakers will debate the propriety of displaying Confederate imagery, such as that contained in Mississippi's flag. (Bill Clark/CQ Roll Call File Photo)

The debate over the Edmund Pettus Bridge predates the conflagration provoked by Charleston's tragedy. It is one that has pitted Sewell against members of her own party in the state. Earlier this month, the Alabama Senate voted to rename the bridge the Journey to Freedom Bridge. The resolution was sponsored by state Sen. Hank Sanders, a black Democrat who represents Selma and surrounding areas rooted in the history of the civil rights struggle.

The Alabama Legislature adjourned before the House took up the resolution, and while it might be a long shot for it to come up in a special session, neither side is backing down.

"Now that people know who Edmund Pettus was, think of the confusion our children will experience when they see the name Edmund Pettus on this famous bridge. ... When we know better, we must do better," Sanders wrote in an op-ed for AL.com .

Nothing doing, Sewell said. "It's not like we're naming the bridge today after a Confederate general," she said. "No one thinks about the name of the bridge, only what it symbolizes." Extolling the marchers who clashed with police and later went on to Montgomery, she said, "They transformed this bridge with their blood."

One of those marchers is now a colleague of Sewell's, Rep. John Lewis, D-Ga.  The two made their own contribution to AL.com on the topic .

"Renaming the bridge will never erase its history. Instead of hiding our history behind a new name we must embrace it — the good and the bad. The historical context of the Edmund Pettus Bridge makes the events of 1965 even more profound. The irony is that a bridge named after a man who inflamed racial hatred is now known worldwide as a symbol of equality and justice. It is biblical — what was meant for evil, God uses for good," Sewell and Lewis wrote.

Addressing the bridge might not top Bentley's list of priorities. He vetoed legislators' spending plan, leaving him and the GOP-dominated Legislature at an impasse over a budget and setting up a need for a special session.

Bentley would set the agenda for such a session. Given the ongoing and contentious debate over taxes, with the governor arguing strongly for more revenue for state operations, the bridge hasn't come up much.

After news broke of his order to remove the Confederate flags, Bentley told AL.com , "This is the right thing to do. We are facing some major issues in this state regarding the budget and other matters that we need to deal with. This had the potential to become a major distraction as we go forward. I have taxes to raise, we have work to do. And it was my decision that the flag needed to come down."

Asked by CQ Roll Call to elaborate on the governor's intentions about the special session, his office did not respond.

Sewell thinks the issue over the bridge is, well, under the bridge. "I don't expect the Alabama Legislature to take this up," she said. "Those of us from Selma understand how complicated the history is here."

Complicated, yes. Going away soon? That's not so clear, either.

Selma Congresswoman Opposed to Renaming Edmund Pettus Bridge Confederate Flag Debate Comes to the Hill See photos, follies, HOH Hits and Misses and more at Roll Call's new video site. Get breaking news alerts and more from Roll Call in your inbox or on your iPhone.