Not everyone gets cards from Fermilab.

Democrat Bill Foster's Longworth office is a modest one, its small waiting area festooned with the requisite Lincolnia befitting a House member from Illinois.

Amid the Land of Lincoln regalia is a more personal effect of the man who represents the 11th District, offering a hint of his role as Congress' science guy. Displayed on the shelves are greetings and salutations from his friends at Fermilab, the national laboratory where Foster helped hunt down the top quark and pursue other experimental physics for nearly a quarter century. The snow-scaped image of Fermilab's upside-down-Y-shaped Wilson Hall helps define who Foster is: a man whose scientific acumen has informed his life as an entrepreneur, physicist and public servant.

Foster has been proudly flying the science flag in the halls of Congress. On the floor, he's gleefully pushed for the House's science measures, even working in references to Star Wars.

In June he hobnobbed with Bill Nye the Science Guy at the White House Maker Faire, a kind of summit to push innovative entrepreneurship.

This is a man who seems comfortable verging into science geekiness.

"I'm sort of of three phases in my adult lifetime," Foster explained to CQ Roll Call.

The first was his founding of Electronic Theatre Controls with his brother Fred, a firm that supplies lighting systems across the globe and helped earn the lawmaker a spot on Roll Call's 50 Richest Members of Congress .

The second was his life in "energy particle physics, and most of that at the Fermi National Accelerator Lab," according to Foster, a phase that lasted almost a quarter century before he decided to step into public life.

It was Foster's coming to a better understanding of his father's life that helped him make the leap to the third phase. 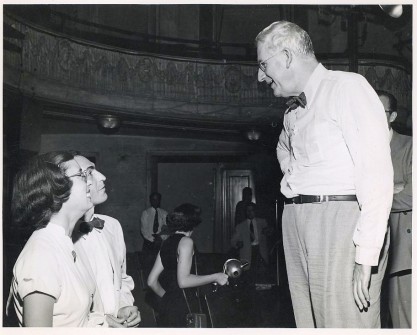 "My dad spent most of the 50s and early 60s actually acting as sort of an advance man for the Justice Department, as a civil rights lawyer," Foster said. "So it was actually reading his papers after he passed away a few years ago that first started me thinking about this. ... What fraction of your life do you spend in service to your fellow man?"

His parents, G.W. Foster and Jeanette Raymond, met while they were both working on Capitol Hill. His father was an aide for Sen. Francis J. Myers, D-Pa., and his mother worked for Sen. Paul Douglas, D-Ill. His father, who started off as a chemist, saw his work on the Hill and for the Justice Department converge eventually when he helped write parts of the Civil Rights Act of 1964.

Foster got his political start working for the 2006 House campaign of Democrat Patrick Murphy in Pennsylvania. Foster said he had an agreement with campaign manager Scott Fairchild "that I would do every job in the campaign."

Murphy won that race, and it sounds like Foster experienced it like most campaign staff do: in humble circumstances. "I spent a couple of months just in the Ramada Inn across from campaign headquarters in Bucks County. The real glamour part. I think it was across the street from the adult bookstore. But it was a great campaign," he recalled.

Foster himself won a 2008 special election to replace former Speaker J. Dennis Hastert, won a full term in 2008, then lost in the 2010 GOP wave. He managed to win his way back to Congress in 2012, and found himself in a quirky but exclusive, informal caucus. "I sometimes introduce myself as saying I represent 50 percent of the strategic reserve of physicists in Congress," he said. "And with the retirement of Rush Holt, my workload's going to double."

There may just be a demand for such a member. Science is in the public eye right now. This month's 45th anniversary of the Apollo 11 moon landing reminded people of the value of scientific discovery. The House also has moved on legislation to shore up funding at the Energy Department's Office of Science, as well as for science, technology, engineering and mathematics (STEM) programs, in addition to a measure to increase the efficiency of research and development programs.

Foster, who told CQ Roll Call that the current environment in Congress is not the most conducive to "logical reasoning and fact-based debate," applauds such moves, perhaps realizing one must strike while the iron is hot.

"It's wonderful to see more of my colleagues recognizing the importance of investing in STEM education and scientific research and development," he told CQ Roll Call in an email when asked his thoughts about this month's spate of science-related floor action. For Foster, minding such matters is important for global competitiveness, a talking point other politicians bandy about but usually don't find much time or effort to tend to.

So over the course of the summer, the entrepreneur/experimental physicist/politician has been playing the role of science guy. Last month on the floor he even gave a shout out to the Joliet Public Library Star Wars Day:

Madam Speaker, as a scientist, it is not often that I come to the floor to speak out on works of science fiction, but I rise today to recognize the Fifth Annual Star Wars Day, hosted by the Joliet Public Library on Saturday, June 7, 2014.

The event not only brings the community together into the historic and welcoming streets of downtown Joliet, but also promotes literacy, science, technology, engineering, and math in a fun and exciting atmosphere that captivates young minds. Thanks to the library's Star Wars Day, no Jedi mind tricks are needed to get children to read over the summer.

In its 5 years, Star Wars Day has grown to over 7,000 attendees, thanks to the hard work of many people. And as the Star Wars parade marched proudly down Ottawa Street, with Imperial Storm Troopers, Jedi Knights, and Ewoks in full costume, I would like to especially recognize the Sand People who, of course, march single file to hide their numbers.

Foster gave his remarks with a straight face, but with obvious awareness of the sublime nature of his one-minute speech. (See video below.)  The Illinois Democrat thinks making people aware of the science surrounding them is one way to ensure the United States stays competitive.

"The amount of subtle and beautiful physics that's necessary to make a smartphone work is enormous," he said. "We have to make sure that every generation grows up to appreciate that technology and the understanding that it takes a lot of hard work and careful thought to get an understanding of that fundamental physics. If we don't, we're going to lose our technological edge in this country."

Maybe the way to pique the interest in science and physics is to boil it down to its most elemental activity: Blowing things up.

"There is an almost universal experience in physicists, at least of my generation, which is home-made pyrotechnics. We can never really compete with the generation before mine, whose experience as young people was the Manhattan Project," Foster said, laughing. "And so there is, I think, a fundamental human instinct to take things apart and see what's inside them, because that's really what these giant accelerators do. You smash things together to find out what's inside them, and what can be created in these collisions. I think it's a fundamental thing."

Get breaking news alerts and more from Roll Call in your inbox or on your iPhone.
Get Permissions

Save for later
Topics: democrats